After the alpine disappointment of last month I decided it was time to get serious about rock climbing. I am timid about lead climbing* and have managed to avoid it by relying on others to lead the climbs and set up top ropes** for me. On returning from Ruapehu, suddenly rock seemed so much safer than snow, so I knew I had a short window to push myself to lead while climbing didn’t seem so bad by comparison. So in the gym I made myself lead climb easy climbs every session and things started to feel like they were getting easier.

When you lead you tend to climb routes that are a couple of grades easier than on top-rope because you don’t want to risk falling. There’s a trade-off to this, because you are not pushing yourself to do the hardest climbs you can do, and you can quickly lose strength. So on returning to Wharepapa South, the place where I had first learned to love rock climbing, I was not feeling super strong or climbing fit, and I’ve had a muddly few weeks in my head so wasn’t feeling on top of the world. 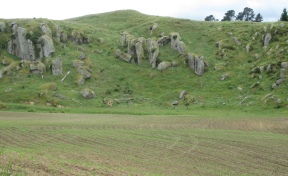 Yeah, just some rocks that formed from volcano ash. Standard.

Wharepapa South in the Waikato region of the North Island is scattered with ignimbrite rock, which forms from clouds of ash and pumice after a volcanic explosion. It makes for a weird and wonderful landscape: bright green rolling cattle fitted hills, with mysterious towers of pocket-filled grey rock in clumps.

My goal for the weekend was to climb a long vertical route (Moon Base Alpha, grade 17) at Froggatt Edge that others in the group had climbed on the previous trip but I had not attempted. My climbing partner led it as her warm-up climb. I decided to give it a go as my first climb, and took advantage of the top rope she had set up. To my surprise, I nailed it in one with no rests and no hanging back on the rope. At the top of the climb I felt full of jubilation, and took a few minutes to enjoy the view and take my traditional top-of-climb selfie. Back at the ground I joked that I had peaked on my first climb and that I was going to just head straight to the pub.

Turns out I did peak on my first climb. Well, maybe that’s a bit mean on myself, but I think I climbed particularly neatly and efficiently that morning. In the afternoon I did my second ever outdoor lead (an easy one… but it was leading all the same!) and with only one minor freak-out half way up. I ended the day with an attempt at a harder route (Bring Your Daughter To The Slaughter, 18). While I made it to the top, it would be lying to say I did it unaided. My belay partner gave me plenty of helping lifts on the way up and a lot of rests. But I was pretty proud that I managed the hard moves at the start of the climb.

On the second day we went to Sheridan Hills. Arriving at a new crag involves spending the first few minutes studying the guidebook to decide which routes to go for. It’s not always easy to identify the climbs from the drawings. It takes a while to get used to the rock and there’s usually a bit of nerves about the first climb. I led Dead Cow Groove (15) – my first ‘proper’ leading, on a popular chimney climb. And I made decent efforts on three other long harder climbs with some technical moves, including an 18. As the day rolled on I started to feel more relaxed and my head started to clear of the mud that had established itself. I slept well. 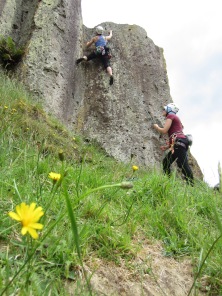 From my chilling position on the grass with my cold

On the Sunday I awoke riddled with cold and an achey head. We ventured to Bayleys Road, and chose to climb at Monday crag as it had a decent selection of easy grades. My first climb was a lead (Gumboot Arete, 15), though it was only four metres long so it was over before I began. I practised cleaning the anchor (removing the gear that had been put in to run the rope off) and abseiling on the way down and took a embarrassingly long time to sort myself out and get to the ground again. On my second climb, thanks to my cold, every limb and muscle said no. So I retired for the day and just belayed and played ukulele in the sun.

Rock climbing is a strange endeavour. With ropes involved it is surprisingly time consuming; the pay-off is slow to come. But when it does come, when you make it to the top of a hard route, it is a great high. Most of all, the effect of a day of concentration is most grounding. It is a truly mindful activity: if you are not mindful you will climb sloppily, inefficiently, and risk a fall. More importantly as a belayer you have to continually concentrate to be sure you are safely looking after your partner and responding to their needs in a way that makes them feel comfortable and confident. So after two days of concentrating on climbing my head was clearer and I felt much more myself than I have done in a long time. I can start to feel the world of opportunity returning and I am itching to get summer trips confirmed and get my fitness and strength back up. Adventures are a-coming.

*Lead climbing: taking the rope up as you ascend, clipping into protection as you go. If you slip, you fall the twice the distance from your most recent protection, plus however much the rope stretches. This may be as little as a foot or as much as 10 feet. But someone has to lead climb to get the rope up to the top, unless you can walk to the top of the route via another access point and set it up from there. So it’s a vital part of the game. Lead climbing forces you to climb better, because you don’t want to slip, and because you can’t rest on the rope.

**Top roping: being suspended from an anchor point by a rope, which your belay partner pulls in as you ascend. This means that when you fall you only fall a foot or so before the rope catches you. It’s easy to rest at any time on top-rope.