I’ve found a goodly number of ways to procrastinate from beginning to plan Te Araroa. I couldn’t possibly plan a journey like that without a wall map, I said. Two months later I’d finally finished mapping out the route: painstakingly working out the lie of the land on a single A2 sheet from 140 individual maps on the Te Araroa website. There’s no way I can put markers and labels on this without laminating it, I lied to myself, taking my time over getting to the shop to acquire said plastic cover. No self-respecting tramper puts a map on the wall without a faux-rustic frame, I protested…

Don’t get me wrong, I love a bit of planning, but some tasks are too overwhelming to start. The number of decisions that need to be made and the implications of all the options throw me into a headspin that ends in me going to the kitchen to find biscuits and not returning to the task for some weeks.

Te Araroa – the Long Pathway – is the name for the journey on foot from the top of the North Island to the bottom of the South. The trail has been officially open for five years, and it connects up pre-existing tramps to form a near continuous journey by foot. The numbers of people doing it roughly double every year, so next year they expect about 1000 trampers. I hate being late to a party so I think I’m just in time to get involved before it becomes passé. The South Island fills me with much more joy than the north so I intend to ‘just’ do that bit (around 1350km). I will add to this a few side trips for the tramps I have been hankering after but not had time for and the peaks I’ve admired from below.

So with seven months to go, I have a map. A beautifully framed one. And a vague sense of timing. And a lot of trepidation about where to start to turn this from a proposition into an actual event. 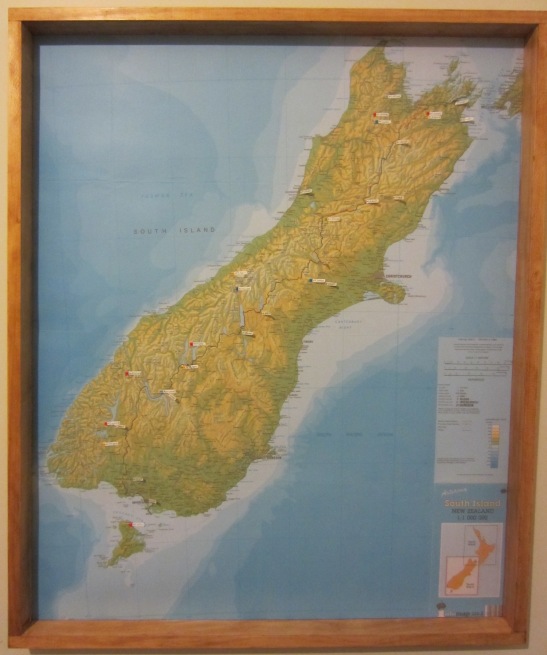 So I thought I’d start with… you. A few enthusiastic folk have indicated their keenness to join me for part of the journey. To get things going I have worked out (thanks to many other lovely bloggers’ research and willingness to share, particularly the good souls at http://www.gustofrenzy.com/ ) the places where it might be easiest to join and leave the track. These are the places where I’ll probably be coming off the track to restock food.

I’ve listed below my initial impressions of what each stage involves. There are four excellent videos hinting at the terrain and scenery of the regions: Nelson-Marlborough / Canterbury / Otago / Southland. I should probably also mention for protection against future litigation that days will probably be 7-11 hours of hiking and up to 1000m of ascent per day. Distance depends on the ascent but probably will be aiming for an average of 25km a day, give or take. Accommodation will be in tents, huts or occasional backpackers at restock points.

I’m likely to start in early or mid-January, and finish sometime in March. Timings will get clearer in a couple of months when I’ve, ahem, actually done some planning.

But at this stage, it would be great to know if people are pondering coming along for a bit as that will a) help me make sense of how to make it work with joiners and leavers  and b) work out whether I can justify the price and weight (480g) of a Handpresso to make you a long black in the mornings to show my appreciation for your commitment. I know I shouldn’t but imagine the joy.

Email me if you want in!