Imagine my horror when – 2km in to a 17km hike, in 30 degree heat, carrying seven days of food, two litres of water and everything I need to look after myself in the backcountry – I realised I was accidentally carrying a whole cucumber. Not the petite sandwich-type that come in expensive plastic packets. A full size cucumber. A cucumber weighs 400g. To put this in context, I’d spent £200 on a new tent to save 800g. My cucumber had become worth £100. I implore you never to get yourself into a situation where you have to eat a whole cucumber. But that is what I forced myself to do, chunk by chunk at each break, so angry was I at this unnecessary extra burden. I felt like I’d swallowed a whole bottle of washing up liquid.

I had set off mid-afternoon to try to avoid the worst of the heat. Even then it was a hideously hot few hours along a gravel track that was cruel on the feet. But after the damn vegetable was finally dealt with, I had a new lease of life which just about powered me along my course to the lake. It was 7pm before it finally settled down to an acceptable walking temperature. I arrived at a suitable camp spot at an hour later, utterly exhausted. My body doesn’t quite seem to have the same vim as the early days, and I started thinking I should try to get a rest soon. I was not hungry after the cucumber incident but I made myself eat, knowing the next day would be impossible if I did not.

The next day I had to choose between a tiny day or a huge one, as there would be no suitable camping spots for a long stretch in the middle. It was another scorcher but I opted for the long option. After a morning spent walking around Lake Ohau, I began a hard climb on rough terrain, right through the heat of the day. I found it so hard to motivate myself alone when things started to get tough, and I longed for the days of yore when I had the others around to share the highs and lows with, and motivate each other. After 11 hours on my feet and a huge ascent I was thoroughly broken and desperate for a place to pitch my tent amidst the tussocky uneven terrain. I crossed the river to an old hut in the hope of finding two metres of level ground. The hut itself was an option but within 15 minutes of arrival a mouse ran across the bunks. It wasn’t even dark. He stopped in its tracks and looked me right in the eye, like he knew had done something naughty. It would have taken an arctic storm for me to sleep in there, and even then I’d have hesitated. But luckily it was a calm night and the ground was indeed flat. As I ate my dinner beside my tent, I started to realise what a big undertaking this section was, and I got the fear. Did I have enough food? I checked. It would be tight. Did I have the stamina and strength in my feet? Did I have the motivation? I’d seen no-one the whole day and longed for some company.

The main event the next day was the Ahuriri River, the biggest river on the TA (Rangitata aside, which is not technically on the trail). I was determined to do it, to prove to myself that I could. It was bloody tough, but I bloody did it, and I felt bloody proud of myself afterwards. I celebrated by eating half the emergency Snickers. I decided to call it quits mid-afternoon at an old musterer’s hut, as the weather was closing in and my feet told me firmly they would not tolerate another six hours to the next hut. It seemed like I might finally face my fear of staying in huts alone. I sat outside the hut hopefully, begging that someone would show to keep me company. But they did not, so I settled down inside to some reading. As soon as I’d relaxed in to the idea of staying alone, four friends from earlier in the trail showed up to camp there. Win!

A big climb over Martha Saddle the following morning had me at Top Timaru hut by lunchtime. It was way too early to stop walking, plus the valley was a sandfly hell, so I decided to push on for a few more kilometres. Good plan in theory but I foolishly overshot the one good camping spot and thus ended up doing another six hours of hard tramping. Gone were the cruisey four-wheel drive tracks and back were the hard, slippery sidles above rivers and the steep forest ascents and descents.

For the last two hours I desperately concentrated on my footwork to avoid a fall in my fatigued state. I spent a whole hour cursing my decision to push on. Steep valleys, it turns out, have zero spots for pitching tents. When I finally arrived at the ‘campsite’ I had been told about, I could have cried, but not tears of joy. True, it was flat and tent-sized, but its proximity to the edge of a bluff and a slip made me hugely uneasy. I did not have the energy to go on up the track or back to the single tent-sized spot I’d passed 30 minutes ago. I pitched the tent, slugged a huge shot of whisky and told myself to shut up.

In the morning I awoke to find the cliff intact and me still on top of it. I decided I’d probably been a bit tired and emotional the night before. As I ascended the brutally steep 600m to the tree line, I spent a whole hour praising my decision to push on the day before. The terrain was hard but steep foresty tracks are how I learnt my tramping trade so it didn’t really phase me. Once out of the trees, as I travelled along the stunning and relatively easy climb over the tops to Breast Hill, I realised I was on the home straight. The hard part of this trip was behind me. I would soon be at a decent hut with human company again. I soaked up the views of the Aspiring Range and lingered at the summit for as long as I dare before boosting down to Pakituhi Hut to bag a bunk.

I’d pushed so hard to Pakituki that I had enough food to take a rest day there, and I basked in the glorious sun, enjoying a steam of visitors passing through. From there it was a fun rocky descent down a cute ridge all the way to the glorious Lake Hawea, and then easy walking on bike trails to Albert Town and through to Wanaka. I took my time getting  into Wanaka, partly as I needed a slower adjustment into civilisation, partly to process the journey of the last week and partly to think about The Future. And the eventual arrival was all the more satisfying for it, meeting up with friends from the trail and soaking up all the beer, ice cream and lakeside lounging that Wanaka has to offer.

Hours saved using Guthook TA app to find out ascent and descent rather than counting contour lines with eyes: 1

Extra hours walked as a result of using Guthook TA app to find campsite rather than finding campsite with eyes: 3 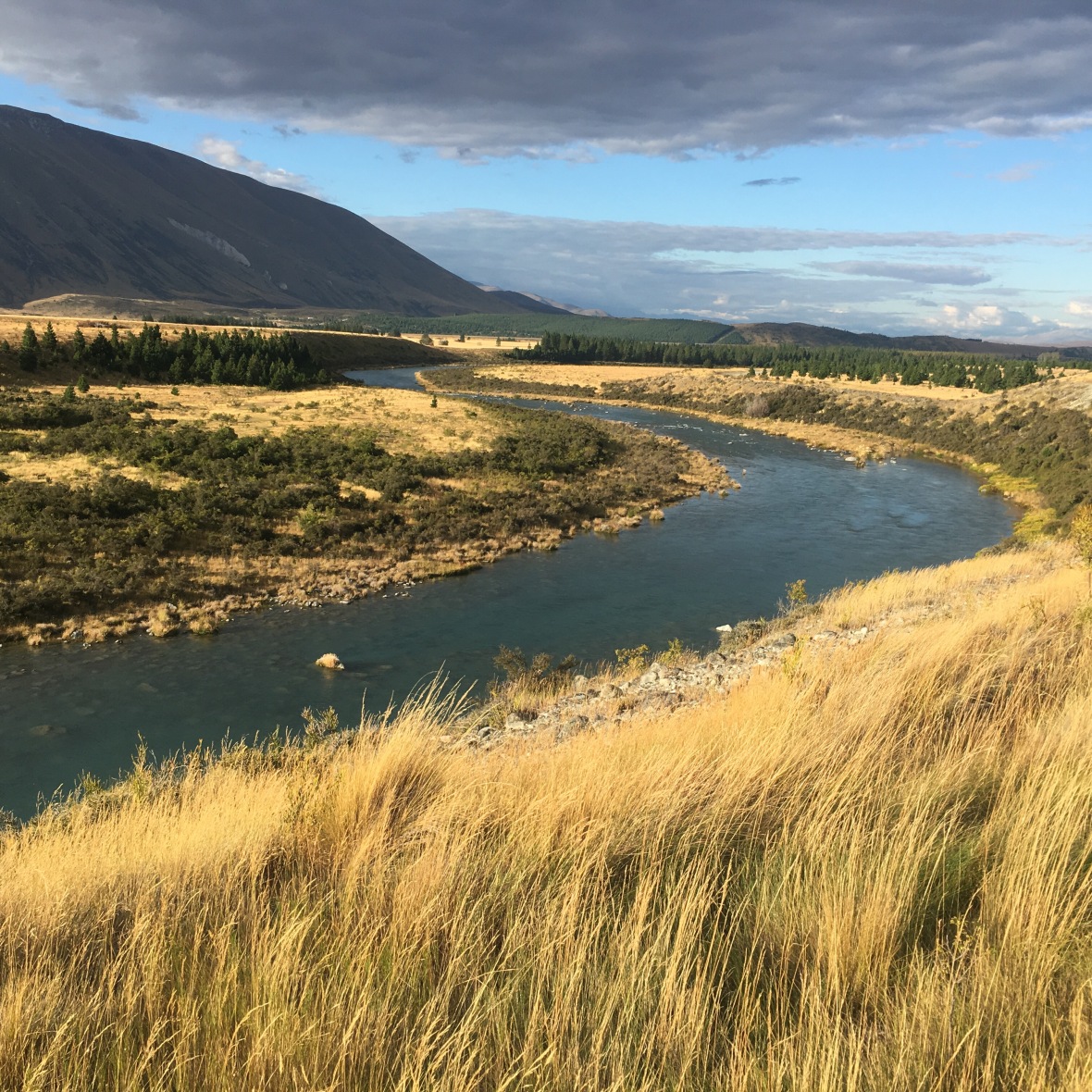 I’ve got quite into silhouette photos. This is what happens when you have no-one else to take photos of 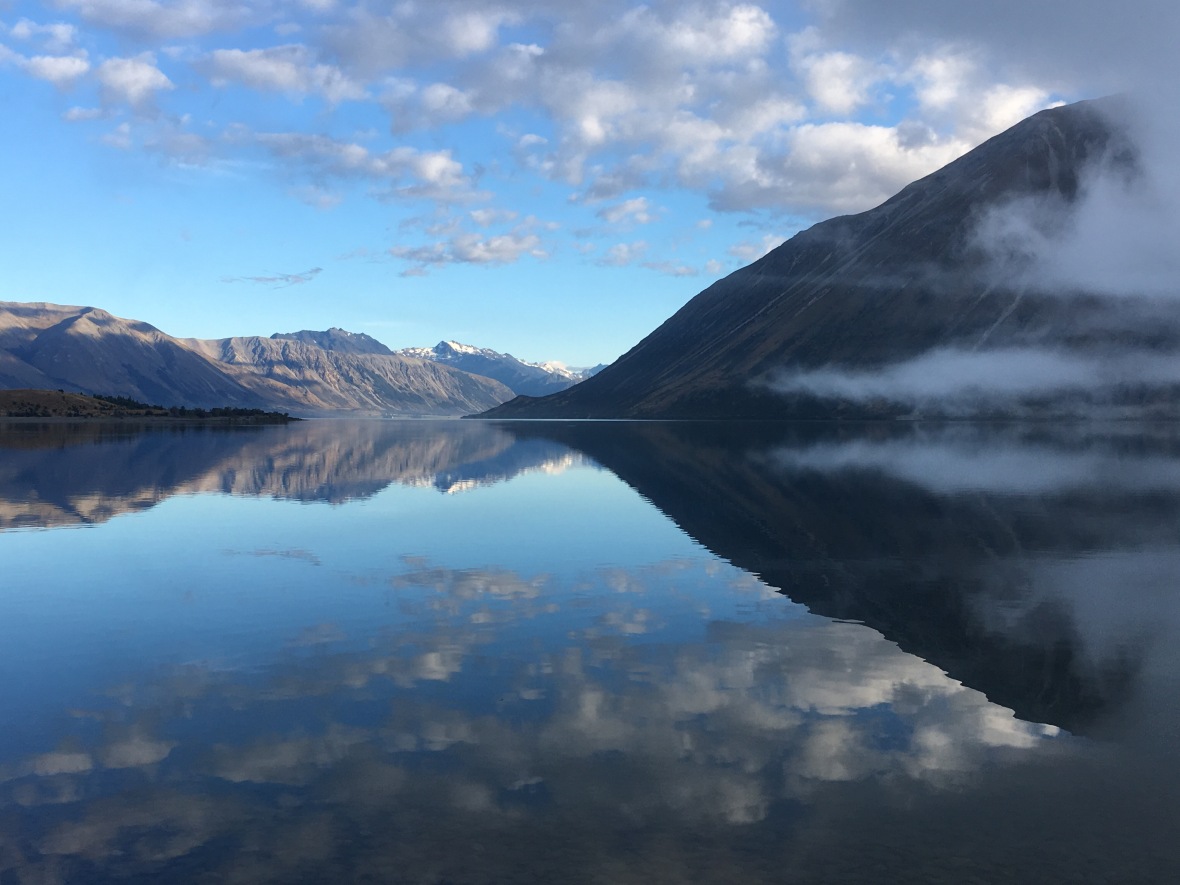 The Ahuriri River. I crossed just upstream of where the river splits

This riverside track would be really beautiful, I thought, if wasn’t too tired to see it 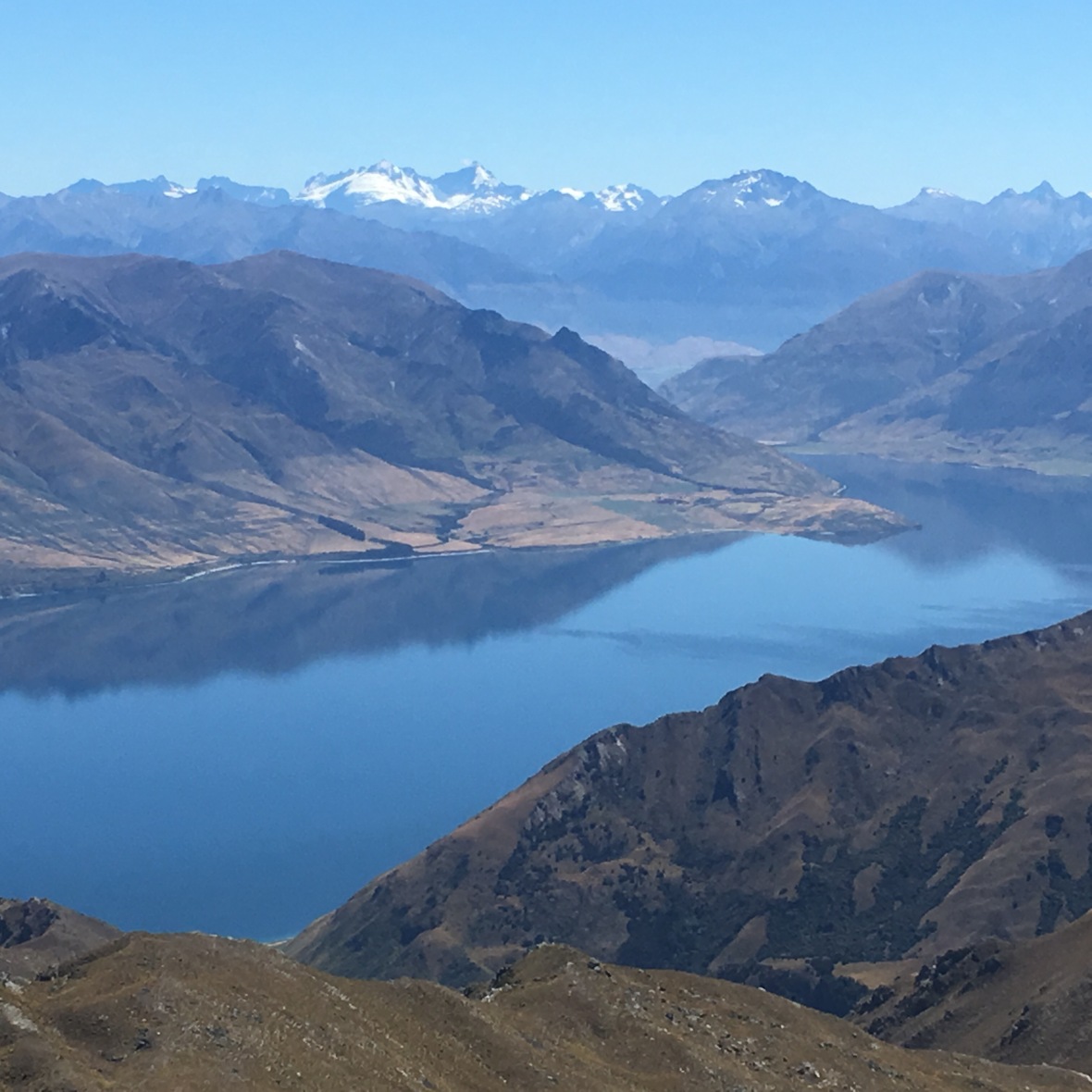 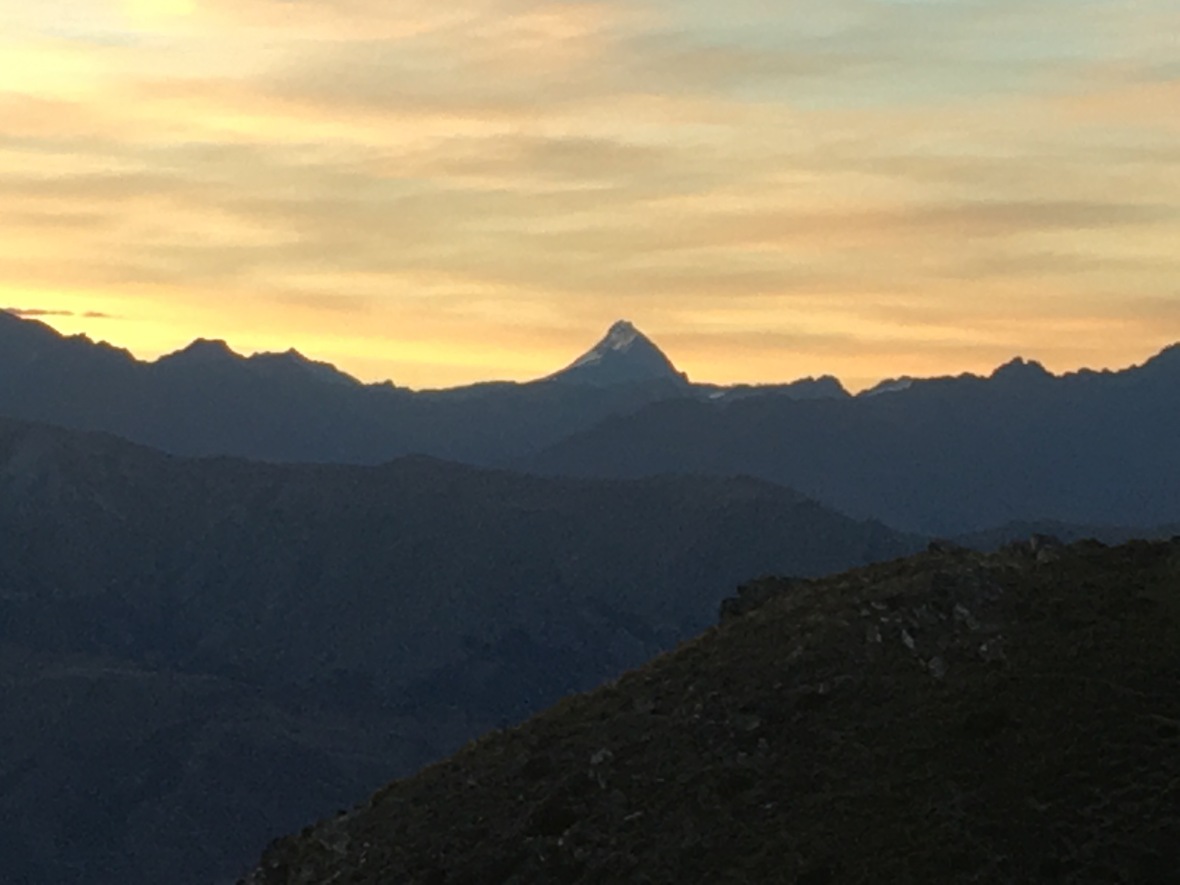