I was hesitant about whether to take the Europaweg, the official finale of the Haute Route. The case for: it would be a challenging, rewarding finish with great views of the Weisshorn and Matterhorn, plus the opportunity to traverse the world’s longest pedestrian suspension bridge, opened just a month earlier. The case against: the route is more risky than the rest of the trail, with long exposed sections and areas with significant rockfall risk – not the sort of track one should attempt alone. But with a good weather window and plenty of positive enthusiasm from the other hikers on the trail, I decided to go for it.

The Kev Reynolds schedule includes a slightly irritating two-hour day just before the Europaweg begins, from St Niklaus to Graechen. He suggests either taking this as a near rest day to gather energy for the hard section to come, or taking the bus up instead of walking it. I didn’t have enough time for the former and I wasn’t attracted to the latter, as I wanted to have the feeling of having walked every step of the trail (yes, I have become a thru-hiking purist). So I decided to tack on this ascent to the Gruben to St Niklaus route. This didn’t sound like an awful idea but in retrospect it was. The steep two hours up through the villages in blinding heat were tortuous on top of an already decent day. 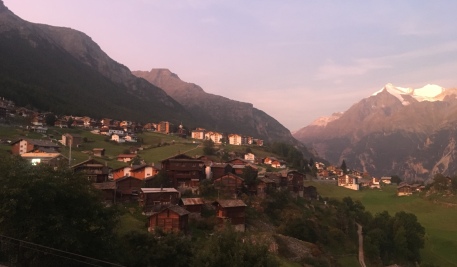 So I wasn’t in the best of strength for hitting the Europaweg on the penultimate day of my trip. A helicopter hanging around at the top of the cliff gave me the heeby-jeebies, as my mind went haywire wondering what horrible thing had happened up there that necessitated a rescue. I felt a tad silly when I learnt it was transporting logs. 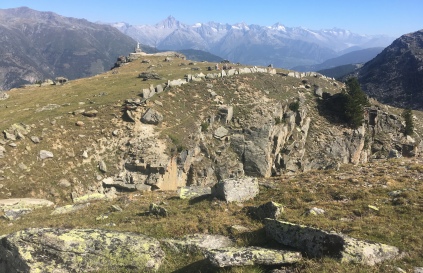 After a steep climb through the forest, I stopped for first lunch to load up on energy for the hard section. The universe kindly provided me with a buddy to cross the rockfall and boulder sections with, as a friend from earlier in the trail popped up at just the right moment. The tricky section lasts about two hours, and includes such hiking delights as signed rockfall sections that you are encouraged to move quickly through, fixed ropes for extra safety above small bluffs, giant boulder fields that look like they have only momentarily settled and loose scree sections around corners. That said, it was nothing I have not tackled before, but it required sustained attention for a long time with little margin for error, and it was quite gruelling in the midday heat. 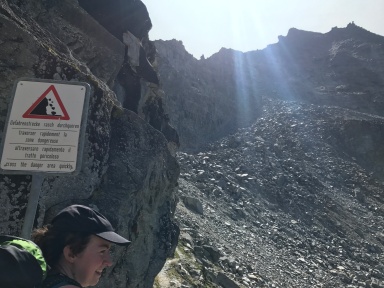 All went well of course, and the boulders did indeed stay in their resting places. I made it to Europa Hut by mid-afternoon time, and settled in the shade to wait for dinner. But I started to feel a bit woozy and to my great disappointment had to rapidly exit stage left before dinner arrived. Cramming the trail into slightly too few days, I had pushed myself too far. Struck down with heatstroke, it took all my energy to fill my water bottle and climb the ladder into bed. Sharing a hot dorm with 30 others while in a feverish nauseous state was not an optimal experience. It was obvious when I awoke that there was zero chance I could complete the trail, with a nine-hour day still to go. This would have been quite devastating to me, were it not for the more pressing matter on my mind of how the hell I was going to get myself out of the mountain hut and into a place where I could properly recover. To my relief there was a path down from the hut to the nearby village of Randa via the new bridge. So I hauled my body and my pack out of the hut – both of which had somehow doubled in weight overnight – and headed slowly down the hill. It was the hardest three hours’ walk of my life and reminded me of the perils of attempting to hike when you are ill. 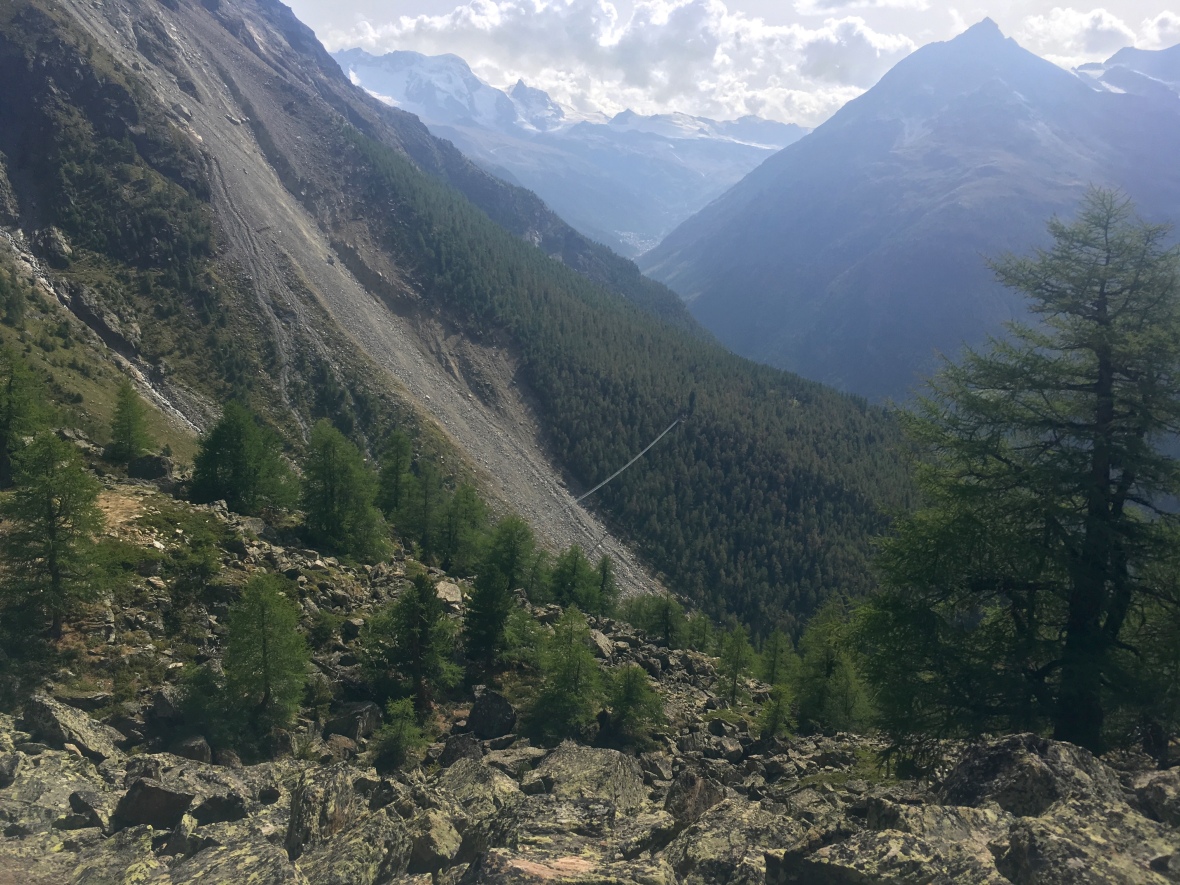 First sight of the bridge

I did manage to enjoy the novelty of the bridge, amongst this morning of self-pity. The bridge takes hikers high over an unstable couloir, which is not passable directly. It is the third incarnation of this shortcut, the two previous structures having been wiped out by rockfall. To deal with this problem the Swiss have built the third (and final?) iteration hilariously high above the valley so that all the rocks will flow beneath it. It was a pretty stable crossing compared to a backcountry bridge in the Tararuas, and I enjoyed the feeling of walking above fully grown trees below. When I finally arrived in Randa I fell into a local hotel and barely rose again until the next day.

So my not-so-triumphant arrival into Zermatt – the finishing point for my trip – was by train and not on foot. So much for doing it the purist way. As if to taunt me for not finishing, the clouds had arrived and the Matterhorn was stolen from my view. Having spent 12 days walking 170km from the foot of Mont Blanc to the foot of the Matterhorn I had feasted my eyes on neither. What a torment! Quel dommage! 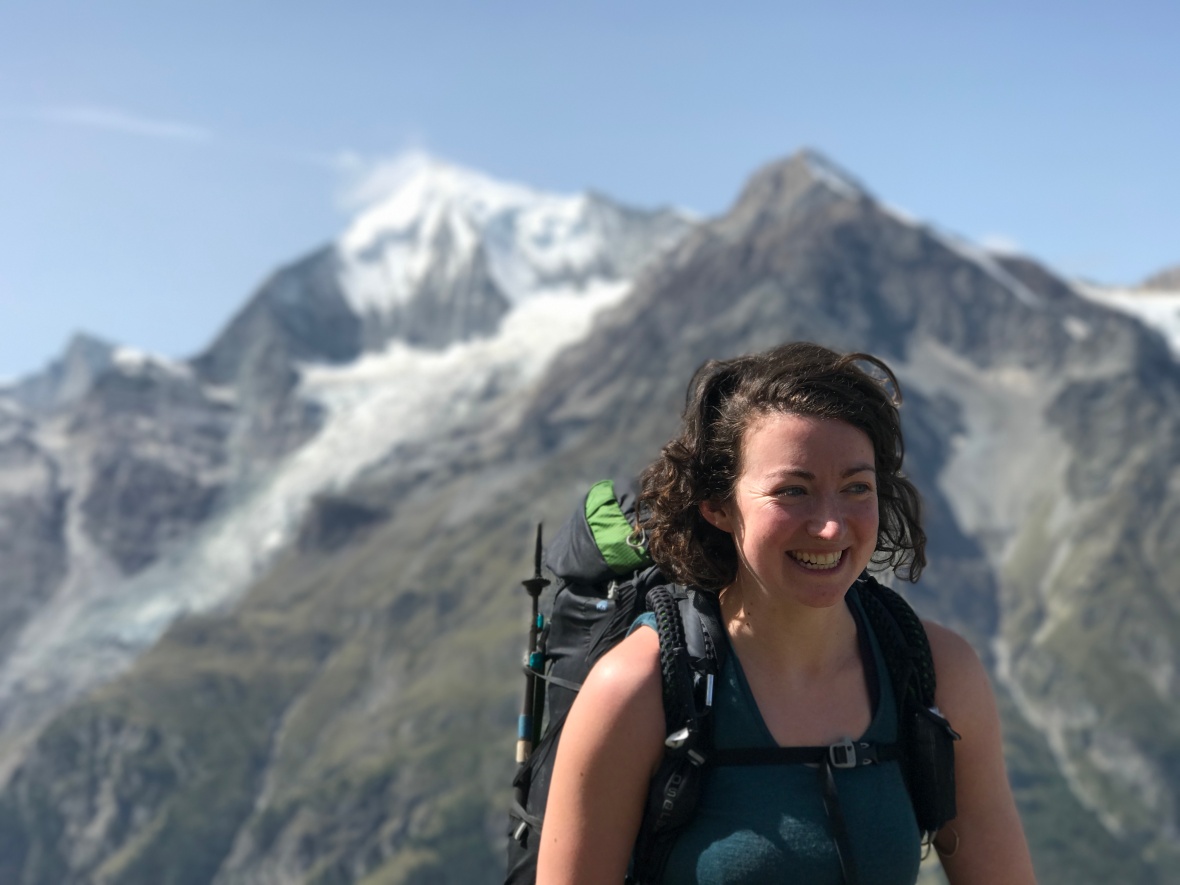 Vitals of the Europaweg suspension bridge: length 494m, height 85m, capacity 250 people, seilspannung 440 kN (not sure what that is but it sounds impressive)