The Walkers’ Haute Route leads you from Chamonix to Zermatt, or Mont Blanc to Matterhorn if your native tongue is Mountain. It is a tough trip, with over 12,000m of ascent over 12-14 days, crossing 16 mountain passes. The reward is being in the high alpine zone, amongst the dramatic spiky ridges of the alps, interspersed with traditional Swiss alpine villages.

YOU SHOULD CHOOSE THE HAUTE ROUTE IF:

YOU SHOULD CHOOSE SOMETHING ELSE IF:
TO TENT OR NOT TO TENT? 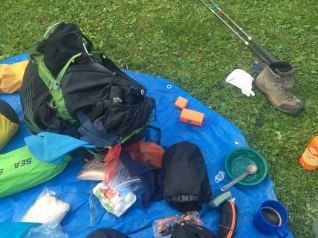 The majority of walkers stay in the refuges and carry only a day pack. This looks like a highly civilised way to do the trail – but being a highly pricey option, and lacking an element of ‘roughing it’ and a lack of control (over food choices etc) it isn’t really my style. So I wanted to camp as much as possible.

Wild camping is not permitted in Switzerland, and I love rules, so I only stayed at legit campsites which were normally in the towns. This means I carried a tent and camping gear over 12,000m of ascent but used it on fewer than half of the nights. This was of questionable sense, and the extra weight on the rough terrain exacerbated some injuries I’d developed earlier in the year. I would probably do the same again, but if you’re not short of money, the refuge route will make your days a LOT more comfortable. 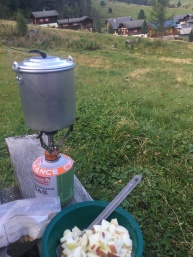 The huts are not set up for self-catering, though in some of the more friendly ones I’m sure you’d find a way round it. On the one night that I stayed in a hotel, I cooked dinner and breakfast from a public bench looking down on the hotel.

One thing to bear in mind is the availability of gas for your stove. You can buy it in Chamonix but in Switzerland 90% of campers use the Camping Gaz system and it is hard to find regular gas cannisters. So carry lots or use an alternative fuel.

I was grateful to the Meaderingmayans for their blog on camping the whole gig. I did meet one couple who were wild camping in some areas. My itinerary is below.

The huts get full and you need to book in advance by telephone. For most of them, I booked my huts a couple of months before travelling. This takes away some flexibility. You have to pre-book your meals and don’t rely on them being able to cater for you if you haven’t done so. If you have any dietary requirements, don’t forget to say so when you book. They have limited stores of food and all the meals are communal style (ie no choice once it’s served up). The deal at huts is typically half board – bed, dinner and breakfast – for about 70 euros (2017 prices). Some will allow you to stay there without dinners for less (but see above comment about self-catering). I found the dinners were good value, breakfasts less so. Plus I’m a woman of routine and prefer to stick with what I know (porridge, dried fruit & nuts and coffee) before a day of hard hiking. 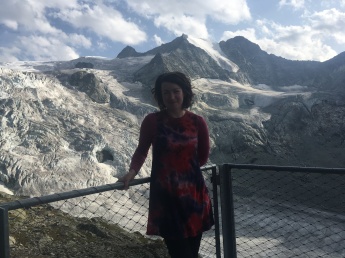 On the deck at Cabane de Moiry

LANGUAGES
Speaking basic French was an asset. In the main this wasn’t the sort of place where people immediately spring into English when they see your pasty skin. Crossing over into German-speaking Switzerland was quite confusing.

GEAR
Turns out the Swiss use a different power plug from the rest of Europe – who knew? So an adaptor is wise if you are relying on phone for navigation/safety/camera. A sunhat and plenty of sun lotion are a must. I am a hiking pole convert and found them helpful on both ascents and descents. The rest of my gear choices are on my Te Araroa gear page.

SUPERMARKETS AND RESUPPLY
There are decent supermarkets in Geneva, Chamonix, Le Chable, Zinal, St Niklaus. There are smaller but still ok ones in Champex and Les Hauderes. If you ran out you could buy lunches from refuges you pass on the way. I carried five days of food from Geneva completely unnecessarily to save money and caused myself injuries as a result of the extra strain when my body wasn’t really ready.

Water is available in most of the villages from fountains; the streams are dubious because of all the farming and ski activity. So I usually ended up carrying a lot from the campsite to be on the safe side and drinking as much as a I could in a village. The huts at altitude have no fresh water so you’ll pay something like 6-8 euros for 2 litres of bottled. I tried to fill up my water bottles at the last village before ascending the hill but this wasn’t always enough. 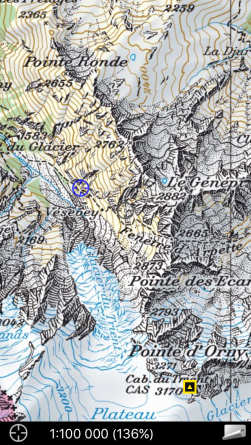 One surprise is that the Haute Route isn’t actually marked as a ‘route’ or trail when you get going. It’s more of a concept than a structure. The signs point you to the next hut but don’t have ‘HR’ symbols on or anything like that. So you need to know where you are heading each day to avoid heading off route or taking longer alternatives by accident. The Kev Reynolds guide book ‘Chamonix to Zermatt, the Walker’s Haute Route’ is how you will know where to go, where you can stay and where to find food, pharmacies or exit travel. It’s a handy and well-written guide, though the descriptions are a bit lengthy, which is annoying as I had to refer to it quite often especially when leaving villages. I bought it from Amazon on Kindle and then each morning took photos on my phone of relevant pages so that I didn’t have to get the Kindle out.

I believe you must never hike without a map so I had both paper maps and back up app. The paper maps are expensive to buy but fortunately a friend had made scans a few years earlier which I printed on A3 in colour. I purchased a year’s subscription to the Swissmap app so that I had offline satelitte navigation for emergencies, and did end up checking it a couple of times. The maps are quite hard to read but you get used to it. Apparently there is an option to print maps from swisstopo.com but I didn’t look into this.

SAFETY
Hiking solo, I found there were quite a lot of safety considerations on this trail. There were several days with sections of difficult terrain that I absolutely would not have done in bad weather. Risk of rock fall and boulder movement were the main risks I was conscious of, and to a slightly lesser degree, exposure and sidling. Hiking alone I would try to leave early in the day so that there would always be people passing me on the trail if I had a slip or trip. Afternoon thunderstorms are highly likely so you are advised to get over the high passes early in the day and get back down to a safer altitude to avoid risk of lightning strike.

Kev Reynolds in the book is quite casual about two marked ‘glacier’ routes as alternative options. I met people who had crossed it who said it was absolutely only possible with crampons and ice axe and when travelling with someone who knows the terrain. So I would not recommend entertaining this idea, which may have been conceived before climate change set in.

The final two days of the trail are the optional Europaweg. This section has known and serious risks and you should make your own decision about the risk vs reward based on the website information, your experience, fitness, comfort levels and weather conditions. It is frequently closed due to rockfall, and the website reports the status. I am happy I did it but it doesn’t stick in my memory as being an unmissable event.

As the trail reaches almost 3000m, it is worth checking that your chosen travel insurance covers you for hiking at this altitude.

HOW LONG TO TAKE?
I would recommend allowing 13-14 days, perhaps less if not carrying a tent. I did it 12 by combining Kev’s suggested days ?1/2 and ?7-8 but I paid a price in that I finished with exhaustion and cemented the total buggery of my feet due to plantar fasciitis and didn’t hike again for eight months. Try not to do that.

FITNESS AND EXPERIENCE
Despite the defined trails, comfortable huts and lack of bush-bashing, don’t be deceived: this is a hard trail. It should only be done by those with hiking experience. You should be comfortable walking 25-30km days with ascent of up to 1600m, sometimes over relatively short distances. The average is 1000m per day. There is significant exposure and rocky terrain, with limited bailout options. I initially underestimated the trail and paid a price for that.

DISCLAIMER
My experience is based only on walking in August 2017 with good weather and solid fitness after 3.5 months of full time time hiking earlier in the year, so all above advice should be tempered if your trip is different. A week later, snow arrived, which would have dramatically changed the conditions and safety given the altitude of the terrain. 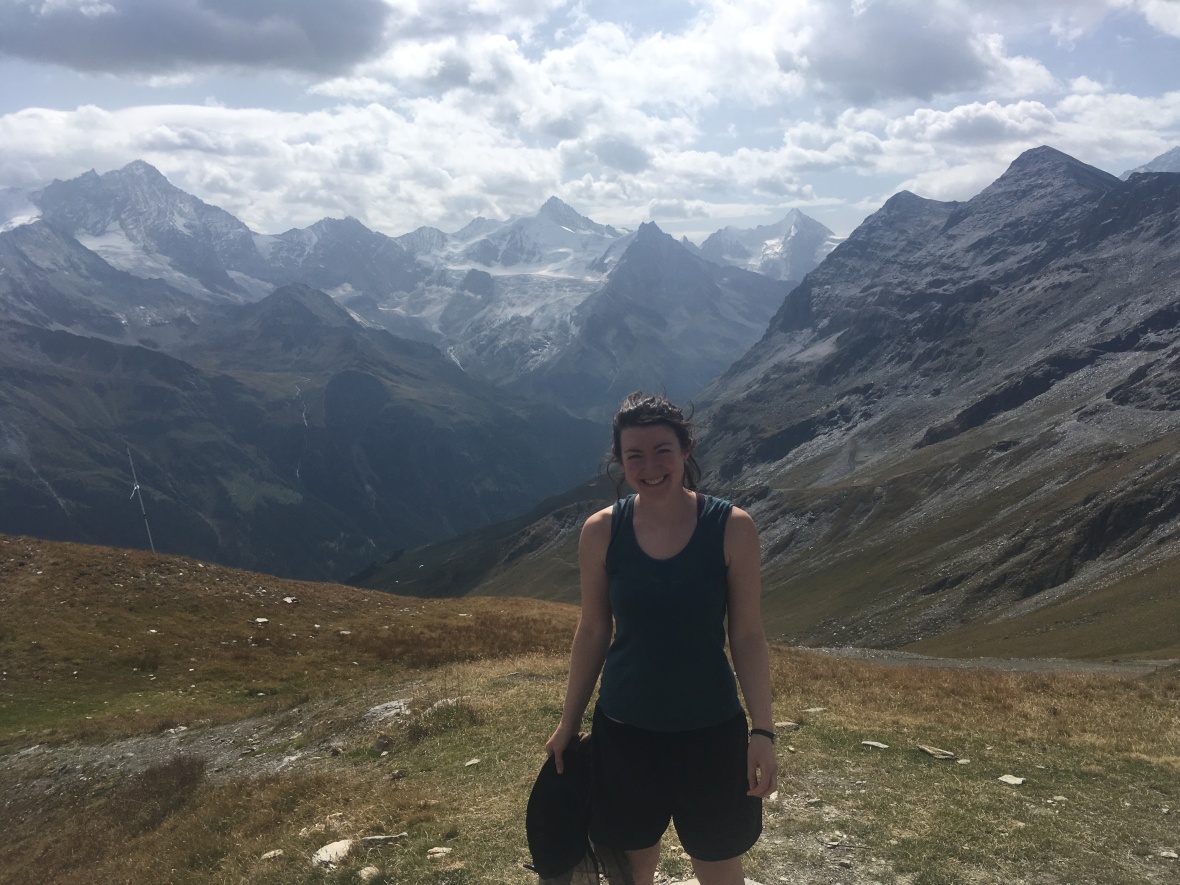 Day 1: Geneva to Chamonix via Ouibus. Camped at Les Arolles ($).

Day 4: Relais d’Arpettes to Le Châble. 15km 5hrs. I think I booked a backpackers here but got upgraded to an airbnb unexpectedly ($/$)

Day 6: Cabane du Mont Fort to Refuge des Ecoulaies, 17km 1235m ascent 9hr15, alas including unnecessary long-cut of 90 minutes and about 200m ascent. Nb! Pay attention to the track markers in the first ten minutes. See a little track that goes towards a house? take that one…. The Refuge des Ecoulaies is a private ski lodge run by the Ski Club Les Pyramides that allows reservations and you leave cash in a box. This was a cheaper self-catering option than the nearby refuge ($/$).

Day 9: Cabane de Moiry to Zinal. 500m ascent 14km 8hrs. I think I stayed at a campsite in front of a pub. No washing facilities for clothes ($).

Day 10: Zinal to Gruben. 1200m ascent 15km 8hrs. Stayed in a dorm room at the Hotel Schwarzhorn as no camping options; cooked dinner and breakfast above the hotel.

Day 11: Gruben to Graechen. 600m ascent 19km 10hrs. Stayed in bunk room at the Gruppenhaus Rosy which I had to myself. Good value, friendly, and they let me use the microwave to cook my dinner. ($/$)

Day 14: Train to Zermatt and then to Geneva.