﻿And then there was one. Caroline’s NZ adventure had come to an end, as she had to return to the northern hemisphere. (Apparently there’s more to life than tramping, or so Pete told me once, though I still dispute this.) It was time for me to set off alone.
I wanted to start with Harper Pass, a major section that we had skipped because of bad weather. But I was worried about doing the river crossings at the end on my own, as they are serious rivers that rise quickly. So I decided to reverse it and go northbound, so I’d have certainty that the rivers would be low. If I couldn’t get across, retreat would be easy.
My first challenge was the Otira River, not ten minutes from the trailhead. River crossings are my weak point as I don’t have much experience to know what is ok and was is not. I was absolutely terrified. I chose what I thought looked like the best crossing point and set to it, one tiny step at a time. The water was below my waist, maybe up to my shorts, but super strong and fast. But I made it across and I was jubilant.

That feeling lasted about five minutes and then total terror set in. What the hell was I thinking doing this trip alone? This is serious tramping and I did not feel equipped. I followed the Taramakau river for two hours, crossing streams and bush-bashing to avoid washed out sections of track putting me in deep water (literally). Then I had to tackle the crossing. Before I started someone told me that when I need something, the TA will provide. This proved true that day, for as I was pondering options, I spied a Southbound tramper heading towards me, the only one I crossed paths with that day. Bingo! I was not alone after all! His crossing strategy, which I’d been about to try – crossing side streams and a feeder river rather than the main event – wasn’t really working. So I took advantage of having him close by to quickly pick a crossing point of the main branch and get going. It must have taken me five full minutes to get across 10 metres, I was so uncertain and the water so strong. But I did it and when I reached the other side he cheered my success. I waited until he too had crossed and then we parted ways. I arrived at the hut calm and happy and shared stories with my hut companions.

On my first full day hiking solo I was still somewhat fearful of making mistakes. The morning was following the river and largely unmarked, but I got into my stride and got more confident. At lunchtime I crossed Harper Pass itself and enjoyed views of distant mountains on both sides of the Alps. 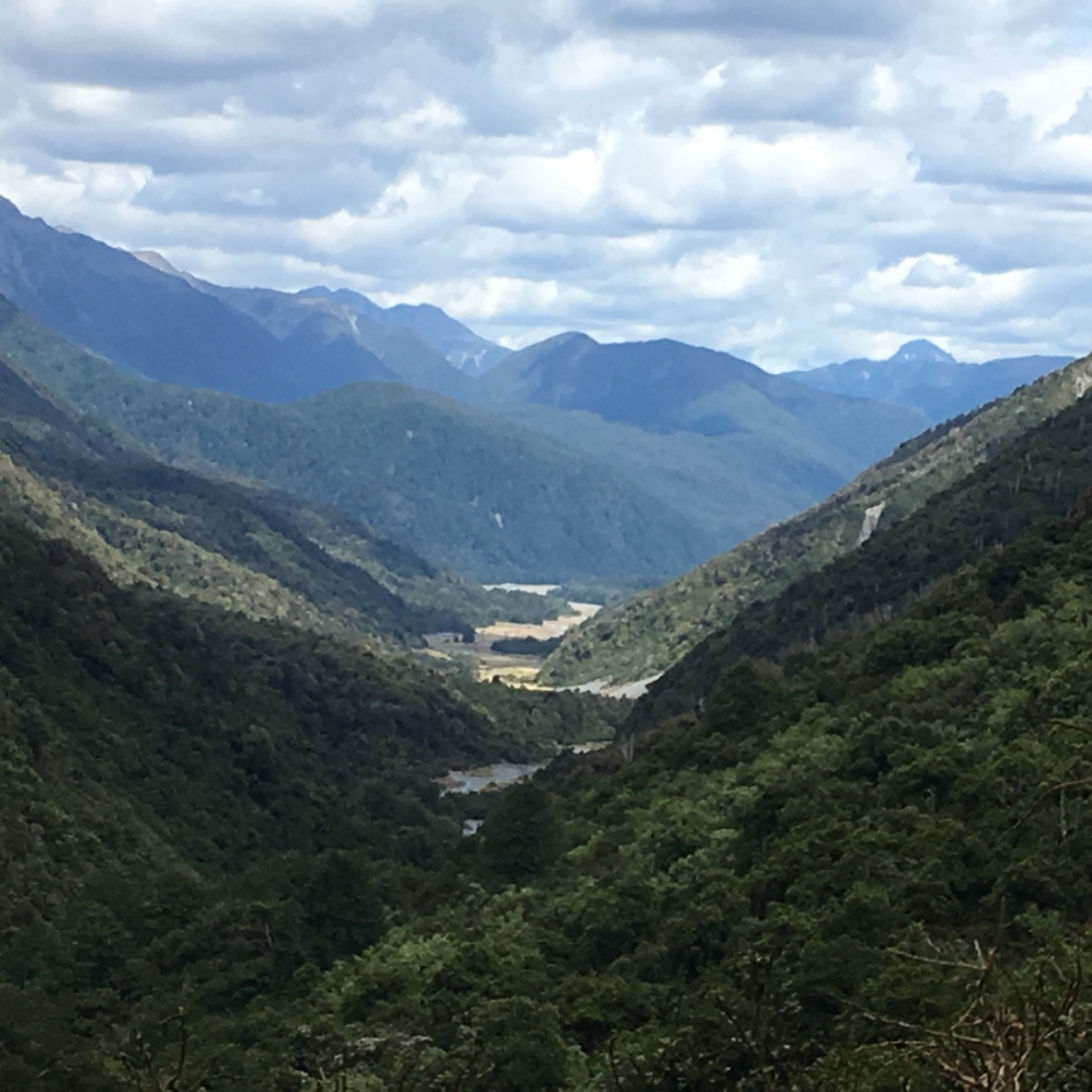 I just walked that!

I pondered the difference between being Northbound (NOBO) and Southbound (SOBO). Being NOBO means you are against the flow as the majority travel SOBO. This meant everyone stopped to talk to me as I was a rare thing, and I had all the info everyone wanted about track conditions and river levels and the huts of choice. However the downside of being NOBO is that when you get to the huts you don’t know anyone. Everyone you meet just passes in a flash never to be seen again. It was nice but I’m looking forward to being SOBO again.

I’ve so far been dismissive of those who wear earphones on the trail. It seems a little odd to go to such lengths to get away from it all only to take yourself away from it all. Plus what if a tree falls in the forest and you miss the chance to find out if it makes a sound? But on day three, after two days of listening to my inner monologue, I couldn’t face it anymore. God what torment. All that ‘where-shall-I-live-what-shall-I-do-with-my-life nonsense’. Honestly I don’t know how you put up with me. A mere 48 hours of my own thoughts and I was done in. I reached for Desert Island Discs in desperation and the situation was much improved.
About 3pm on day three my feet were aching so I stopped to rest and check the map. At this point I discovered the devastating news that I’d accidentally planned a 27km day, of which there were still nine to go. Dang and blast. After a short moment of self pity I ate a cereal bar in a single mouthful and pushed onwards. The hut was visible for the final 1.5km as I crossed a huge meadow. At the hut I was happy to bump into some friends from day 1 and we shared some whisky and chatted about trail adventures. A “short” final day of six hours completely my adventure.
Tomorrow, thanks to the magic of cars and buses, I’ll be back in Arthurs Pass, which is, er, where I left from four days ago. Oh well. First solo trip down!

Why take the low stream when you can take this 3-wire bridge? 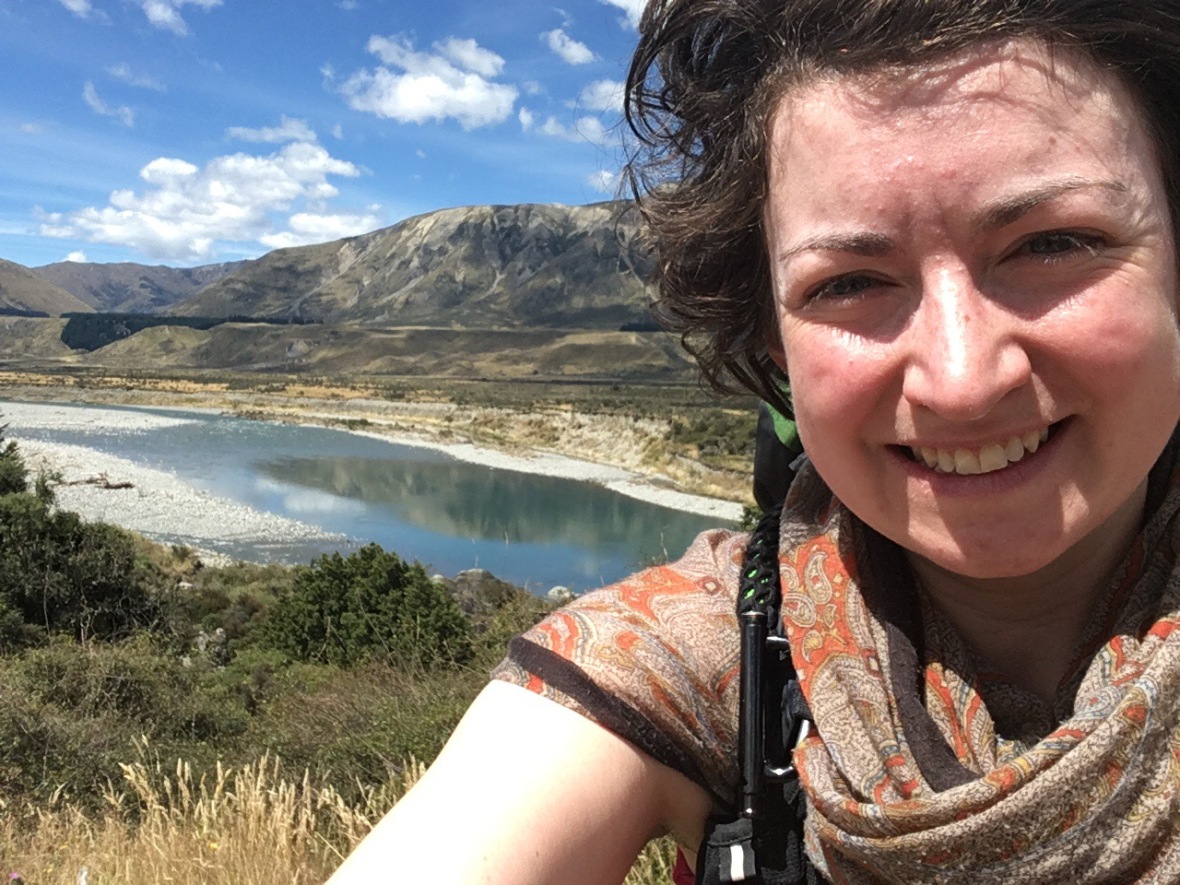 Last day with dry feet: can’t even recall
HOW I SPENT MY DAYS

31: Chaufferred to AP. Aitkens corner to Kiwi Hut, 10.5km, 4 hours. (River crossings of Otira and Taramakau both fast and strong at normal flow)

33: Hurunui No 3 Hut to Hope Kiwi Lodge, 27km, 10hrs including hot pool soaking (joyful except for the sandflies)